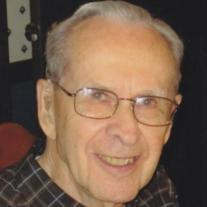 David A. Forbes, 90 of Lorain, died suddenly on Wednesday, September 5, 2012 at his residence.
Born October 21, 1921 in Lorain, David grew up in Cleveland, returning to Lorain at the age of 16 where he had lived since. He graduated from Lorain High School in 1940.
While working at Sterling Linder Davis, he attended evening classes at Fenn College (now CSU) where he studied engineering. He also worked at Lorain Works US Steel in 1942 as an apprentice machinist. He served in the US Navy during World War II. While on leave from the war, David married the love of his life, Virginia Mae (nee Weaver) on April 5, 1944. Following the service, he worked as a cabinet maker in a cabinet factory for 6 years. David became a design draftsman, working for Arthur G. McKee in Cleveland, Davey International and Brown Fintube Company. He retired from Enercon Systems in Elyria in 1983.
He was a member of Cosmopolitan Dance Club, Family Motor Coach Association, Ohio Nomad Camping Group, Northeastern Chapter of the World War II Submarine Veterans, and the Beaver Creek Boat Club.
David enjoyed woodworking and boating. He was also active with the Boy Scouts.
Surviving is his son, Lawerance "Larry" (Claudia) of Avon Lake; daughters, Claudia Csalos of Lorain and Peggy (Dave) Schulz of Cincinnati; 11 grandchildren and 8 great grandchildren.
He was preceded in death by his wife of 62 years, Virginia Mae (nee Weaver) Forbes in 2006; a son, Kenneth in 1989; and his parents, David H.C. and Anne Elizabeth (nee Grob) Forbes; and a brother, Goddard Forbes.
The family will receive friends on Sunday from 2:00 -4:00 pm and 7:00 pm until the time of services at 8:30 pm in the Dovin Funeral Home, 2701 Elyria Avenue, Lorain. Rev. Lou Maldonado, Deacon of St. Mary Catholic Church, Lorain, will officiate. Burial will be held at a later date.
To send online condolences, go to www.dovinfuneralhome.com
To order memorial trees or send flowers to the family in memory of David A. Forbes, please visit our flower store.