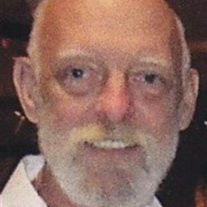 David R. "Oscar" Dembinski, 62, of Lorain, died Tuesday, September 24, 2013 at the Louis Stokes Cleveland VA Center after a short illness.
Born June 4, 1951 in Lorain, he lived in Oklahoma City for a few years returning to Lorain in 1990.
Oscar graduated from Admiral King High School and served 8 years in the US Air Force during the Vietnam War.
Oscar was a self employed painter and while living in Oklahoma City he also worked as a mechanic. Oscar was a drummer, playing in many bands over the years including Ed Klimczak's Family Music Band.
He enjoyed classic cars and going to car shows, computers, and was an avid Cleveland Browns Fan. Oscar's artistic abilities allowed him to transform non wood materials by painting them to look like natural wood.
He is survived by his son, Dayna (Dianna) of Georgetown, TX; a stepson, Dustin of Oklahoma; grandsons, Nathan and Cameron; a sister, Donna Dembinski of Lorain; and his loving and faithful schnauzer companion, Stanley.
He was preceded in death by his parents, Chester in 1967 and Mary (Gradish) Dembinski in 2013; and a brother, Richard in 1966.
The family will receive friends on Friday from 2-4 and 7-9 pm in the Dovin Funeral Home, 2701 Elyria Avenue, Lorain, where funeral services will be Saturday at 11:00 am. Rev. Edgar Gonzalez, deacon of St. Vincent de Paul Catholic Church, Elyria, will officiate. Burial will follow in Calvary Cemetery, Lorain. The Disabled American Veterans Louis Paul Proy Chapter 20 will conduct military honors.
To send online condolences go to www.dovinfuneralhome.com