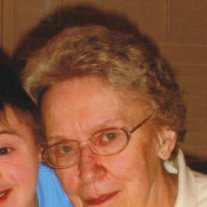 Darlene Kajganich (nee Martincin), died peacefully August 16th 2013, surrounded by loving family at the Cleveland Clinic following a brief illness. She was 79 years old.
She was born on April 2nd 1934 in Lorain and moved to Sheffield Village in 1956. She was a loving wife and friend to her husband of 60 years, Milan, a wonderful mother to their five children, and a beloved grandmother. She was a member of St. George Serbian Orthodox Church and the Circle of Serbian Sisters. She helped found "First Down," a Down syndrome resource group, enjoyed having her family around her, cooking and baking, and was a savvy Bingo player.
She is survived by her husband; daughters Mrs. Dennis (Lori) Govich of Elyria, Mrs. David (Lisa) Hawn of Lorain, and Diane of Sheffield Village; sons Steven of Taunton, Massachusetts and David of Los Angeles; five grandchildren; and six great-grandchildren. Also, brothers Eugene of Lorain, Richard of Sheffield Village, and Anthony of Chicago, as well as many nieces and nephews.
She was preceded in death by her parents, Joseph and Sophie; brother Joseph; and sisters Helen Bacha, Cecilia Farkas, Mildred Groboske, Eleonore Butchko, and Betty Simo.
The family is holding private services.
To order memorial trees or send flowers to the family in memory of Darlene M. Kajganich, please visit our flower store.