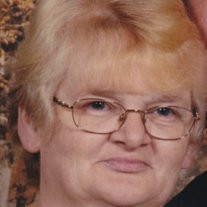 Dale Lynne Carter, (nee Speakman), age 62, of Vermilion, died on Monday, April 1, 2013 in the ER at Mercy Regional Medical Center, following a brief illness.
Dale Lynne was born on August 23, 1950 in Canton, Ohio. She was a resident of Vermilion for the past 11 years.
Dale Lynne enjoyed arts and crafts, especially quilting and spending time with her family.
She was employed at DC Enterprises and had also had worked for Hardees on the turnpike for 15 years. During racing season she was employed at Lorain County Speedway.
She is survived by her husband: David L. Carter, of Vermilion, father: Howard L. Speakman, sons: David L. (Leigha) Hartshorne, of Kensington, Todd A. Hartshorne, of Malvern, 3 grandchildren, and sister: Jacqueline Clay of Canton, OH, and her special pets, Sassy, Scooter and A.J.
She was preceded in death by her mother: Ruth (nee Lemay) Speakman.
The family will receive friends on Thursday, April 4, 2013 from 4-8 p.m. in the Dovin Funeral Home, 2701 Elyria Avenue, Lorain, with a service at 7:30 p.m. Rev. Jim Cooper, pastor of Harbourtown Community Church, Vermilion will officiate.
In lieu of flowers, donations may be made to the Dovin Funeral Home for funeral expenses.
To send online condolences go to www.dovinfuneralhome.com.
.
To order memorial trees or send flowers to the family in memory of Dale Lynne Carter, please visit our flower store.