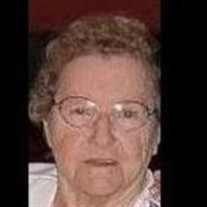 Clara C. (Kotnik) Pleska age 97 of Sterling formerly of Elyria, Ohio passed away peacefully on Thursday, September 11, 2014. She was the beloved wife of the late John Pleska.

Born in Pittsburgh on January 23, 1917 she was the daughter of the late Michael and Mary (Mikus) Kotnik. Raised in Avella, PA she later moved to Cleveland, Ohio.

Clara married September 2, 1940 and settled in Elyria, Ohio. She was a devoted wife and mother.

Clara found pleasure in sewing and crocheting afghans, doilies, and handkerchiefs; winning many local awards for her crocheting and a national award for her needlework in the early 70s. She also enjoyed baking for family and friends. Her original apple strudel recipe has become a much loved treat for many.

Family was the center of her life. She treasured spending time with all of her children, grandchildren, and great granddaughters. She also enjoyed dancing in her husband's arms.

She is survived by her children, Cecilia Burdikoff and husband Fr. Igor of NY, Linda Halligan and husband Timothy of Lunenburg, MA, and John Pleska and wife Miriam of FL. She is also survived by her grandchildren Stephanie (Jeff) Zak, Michael (Karen) Burdikoff, Christine (Brian) Boucher, Tim (JacLyn) Halligan, Laura (Michael) Abernathy, and Jonathan Pleska as well as 7 great-granddaughters.
To order memorial trees or send flowers to the family in memory of Clara C. Pleska, please visit our flower store.