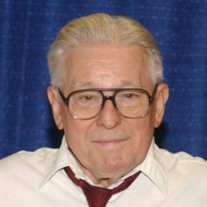 Carl Lewis Sniezek, 93, formerly of Amherst, Ohio, went home to the Lord December 5th. He was born to the late Anton and Caroline (nee Pelikan) Sniezek on August 2, 1920, in Elyria, Ohio, and graduated from Elyria High School in 1938. In addition to his parents, he is preceded in death by his wife of 52 years, Anne J. Sniezek (nee Wnek), sisters - Adelia Sniezek, Anna Urpschot, Nellie Zack, Veronica Kaminski, and Emma Poplar, brother - Anton (Pat) Sniezek, daughter - Janet A. Sniezek, and identical twin granddaughters - Merilyn and Meredith Grasse.
He is survived by his daughter, Karen S. Viterna (Larry) of Olmsted Falls, his sons, Dennis J. Sniezek and Paul Sniezek (Donna) of Elyria, eleven grandchildren and nine great-grandchildren.
As a Machinist's Mate First Class he served in the US Navy aboard the USS Kephart from 1943 to 1946 receiving the Philippine Liberation Ribbon (1 star), American Area Campaign Medal, European African Middle Eastern Campaign Medal, Asiatic Pacific Area Campaign Medal (3 stars) and Victory Medal.
Carl retired in 1984 after 34 years of employment/ownership from Wnek's Auto Service, Inc. A devout Catholic, he was a member of St. Stanislaus in Lorain, Holy Cross and St. Agnes both in Elyria. He served as a member of the Holy Name Society, Congregation of the Sacred Heart at Church of St. Peter, Society for the Preservation of Polish Culture, Elyria United Polish Club, Senior Citizens Association, the Association for the Advancement of Retired Persons, American Legion Post (118), Veterans of Foreign Wars Post 1662 and the Amherst Veterans Military Honor Guard.
Carl enjoyed gardening, golfing, many varieties of music, playing the organ, singing, and ballroom dancing. He was a loyal fan of Cleveland sports teams throughout all his years.
Special thanks to the exceptional people at Keystone Pointe whose contribution to the quality of his final months of life cannot be adequately expressed. In lieu of flowers, a donation to the Amherst Veterans Military Honor Guard, Attn: Clark Bruner, American Legion, 921 North Lake Street, Amherst, OH 44001 or to Tridia Hospice, 5000 Rockside Road, Suite 150, Independence, Ohio 44131 is suggested.
Family will receive friends from 2-4 and 7-9 on Thursday at Dovin Funeral Home, 2701 Elyria Avenue in Lorain. Visitation will also be held on Friday from 10AM until mass at 11AM at St Agnes Church on Lake Avenue in Elyria. Burial will be with military honors in Calvary Cemetery in Lorain.
To send online condolences go to www.dovinfuneralhome.com.
.