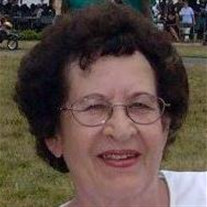 Betty Pall (nee Kotai) 81, a life-long Lorain resident passed away Monday, March 9 after a lengthy illness.
Betty was born on May 19, 1933 to the late Steve and Helen (nee Lampert) Kotai. She graduated from Lorain High School in 1951. She married Richard Frank Pall in 1956. He passed away in 2010.
Her work history included stints at Nelson Stud Welding Company, Fruehauf Trailer and Cadillac Tank Plant doing clerical and office work.
After marriage, she focused on raising her four children, daughters: Shelley Pall Shepherd Klaner of Petaluma, Calif.; Susan Denley of Chesapeake, Virginia; Leslie O'Keefe of Lorain; and one son, Richard S. Pall of Vermilion.
Betty took great pride in raising her children and keeping a beautiful home and garden. She also enjoyed reading, gambling and shopping. She travelled extensively visiting Europe, especially Hungary, her heritage. She spent most winters in Marco Island, Fla. She was a wonderful cook, specializing in her Hungarian favorites such as stuffed cabbage.
She joined the Hungarian Reformed United Church of Christ when she was 13 and was a life-long member, not attending as often as she would have liked in later years due to failing health.
She was preceded in death by four sisters: Rosemary Bayan, Irene Hardik, Ethel Kotai, Ruth Kotai; and by two brothers, Joseph Kotai and Stephen Kotai.
Besides her children, she is survived by grandchildren: Jennifer Shepherd of Norwich, Conn.; Kara Smarsh of Columbus; Leah Smarsh of Lorain; Bethay Skvortsova of Washington DC; and Aubrey Pall Of Vermilion. She is also survived by son-in-laws Peter C. Klaner of Petaluma, Calif. and Captain Jim Denley of Chesapeake, Virginia, as well as numerous nieces and nephews. She had a special relationship with her niece Stephenie Green of Woodstock, Ohio.
The family will receive friends on Friday from 2 to 4 p.m. and 7 to 9 p.m. at the Dovin Funeral Home, 2701 Elyria Ave., Lorain. A funeral service will be held Saturday at noon in the funeral home with Rev. Peter Toth, pastor of Hungarian Reformed Church of Christ, officiating. Burial at Ridge Hill Memorial Park and a luncheon to follow at Dovin Funeral Home.
To order memorial trees or send flowers to the family in memory of Betty Pall, please visit our flower store.