Arthur Lee Reynolds, 86, of Elyria, passed away Sunday, September 6, 2015 at Avon Oaks Caring Community following a lengthy illness.
Born April 6, 1929 in Berea, he lived in Belden and in the Elyria and Lorain area. After retiring, he moved to Florida and returned to Elyria in 2012 to live near his children.
Arthur served in the US Navy during World War II. He received the World War II Victory Medal, Presidential Testimonial Letter and the European Occupation Medal.
He worked as a truck driver for 35 years, retiring from Rowland Trucking in 1986. He enjoyed fishing, reading, traveling and going out to dinner.
Surviving is his wife of 40 years, Susan (nee Bostik); daughters, Peggy Alexander of South Amherst, Donna Patton and Gayle Patton both of Elyria; a son, Ron Reynolds of Port Orange, Florida; step son, Leon Krupp of Vermilion; step daughters, Cindy Bracy and Valli King both of Vermilion, and Susan Socha of Amherst; 18 grandchildren and 13 great grandchildren; brothers, William Reynolds of Haines City, Florida and Donald Reynolds of Avon; sisters, Carol Rauscher and Ella Rauscher both of Haines City, Florida and Jane Hamric of Cadiz.
He was preceded in death by his parents, Arthur and Amelia M. (nee Frohlich) Reynolds; a daughter, Diana Reynolds; a step daughter, Gail Kiss; A brother, Edward Reynolds; and a sister, Betty Metzger.
The family will receive friends on Saturday from 11:00 am until the time of services at 12:00 pm at New Life Hospice Residential Center, 3500 Kolbe Road, Lorain. Rev. C. Thomas Cleaton, pastor of St. Mary of the Immaculate Conception Catholic Church, Avon, will officiate.
The Dovin Funeral Home, 2701 Elyria Avenue, Lorain, is handling the arrangements. To send online condolences go to www.dovinfuneralhome.com.

To plant memorial trees or send flowers to the family in memory of Arthur Reynolds, please visit our flower store.

Dear Aunt Sue, I am so sorry I was unable to attend Art's funeral services. I send to you my deepest sympathy for your loss. After I start feeling better, I will come over to visit with you, of course, I will have to bring Iden, too. I love you, and hope you know that he is in a better place, no matter how hard it is to have been parted from him.Sending you all my love.Sally 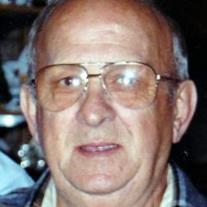