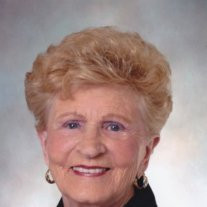 Anna R. "Aunt Pete" George (nee Thomas), age 87, of Elyria, passed away on Tuesday, August 27, 2013, at her home.
She was born on May 18, 1926, in Hensley, PA. She owned and operated Ms. Ann's Day Nursery for 20 years, until it closed in 1986. She also worked as a nanny for many families and was a rental agent and a resident housing manager. Anna was a member of Lorain Baptist Church. She enjoyed Ballroom and Polka dancing, running around with her best friends, playing cards, painting, landscaping, children's activities, and playing games on her laptop computer.
She is survived by her daughters; Connie George, of Lorain and Barbara Gerhart, of Elyria, sons; Lonnie George, of Lorain, Jerry Half, of Springfield, OH, Tim Garska, of Wellington, and Terry Garska, of Oberlin, 7 grandchildren, 5 great grandchildren, and a sister, Tiny Garska, of Raleigh, NC.
She was preceded in death by her husband, Lloyd T. George, in 2004, a brother, William Thomas, sister, Hellen Morris, and her parents; Clarence and Ruth (nee Rose) Thomas.
The family will receive friends on Friday, from 10 am until the time of services at 12:00 pm, in te Dovin Funeral Home, 2701 Elyria Avenue. The Rev. Bill Moore, her nephew, will officiate. Burial will follow in Ridge Hill Memorial Park, Amherst Twp.