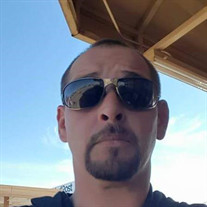 Andrew J. Gelinas, age 35, passed away suddenly on Thursday, December 14, 2017 at his home in Lorain, Ohio. He was born January 26, 1982 in Waterbury, Connecticut to Theodore Gelinas, Sr. and Susan Britton.
Andrew worked as a mechanic and had recently moved to the Lorain area from Arizona. He enjoyed working on cars and playing in the snow. He was known for being a fun-loving person who enjoyed being a kid at heart.
He is survived by his son and daughter; sister, Nykole (Jacob) Britton, brothers, Theodore (Samantha) Gelinas, Jr., Joe Gelinas, and LJ (John) Britton.
Andrew was preceded in death by his parents and his step-father, Leonard Britton, Sr.
Private services will be held. Memorial contributions can be made to an organization of the donor's choosing. To send online condolences go to www.dovinfcs.com.
To order memorial trees or send flowers to the family in memory of Andrew J. Gelinas, please visit our flower store.